Start a Wiki
Run News
We need your attention here in these pages! 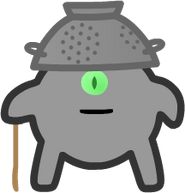 The Pastafarian is a priest of the Church of the Flying Spaghetti Monster. According to her, her main duty is to help others, which she does by suggesting ways they could improve themselves. She's been seen making suggestions to the Student and the Angel, apparently without success.The Pastafarian can only be unlocked by buying her in the shop for 6,000 power cells on the web or 25,000 in Run Mobile. A "bridge" of bright squares called the 'light bridge' appears when the Pastafarian is around, allowing her to run on what would otherwise be empty space. Running on the bridge speeds her up, but if she goes too far from solid ground, the bridge disappears. Read more...

Statistics of the Wiki
Retrieved from "https://run.fandom.com/wiki/Run_Wikia?oldid=51387"
Community content is available under CC-BY-SA unless otherwise noted.