Jump while airborne to gain a speed boost.

10.5 m/s
The Angel is a character in Run 3, and is an engineer, who was previously employed at "The Factory". He considers himself as a hero, but he constantly belittles everyone he meets, insulting their decisions, their competence, and/or their appearance. The Angel is described as a "dashing fellow" and "self-proclaimed hero" in the game. He is also the protagonist in the Angel Missions. He claims to know the purpose of the Tunnels, calling it "obvious", yet never revealing it to the others.

The Angel can only be unlocked by buying him in the shop for 12,000 Power cells, making him the most costly character except on mobile, where he is beaten by the Duplicator and the Pastafarian.

The Angel can dash forwards in midair, gaining a lot of speed and a little height. This makes him one of the fastest characters in the game, at a top speed of about 19 m/s, and gives him a chance to recover if he messes up a jump.

After dashing forwards, he keeps his extra speed for a short time. During this time, if he jumps, the jump will go much farther. Then if he dashes again at the end of the jump, he can extend it even farther. Doing this lets him jump almost as far as the Bunny can. However, when the power is out, the boost will diminish and his speed will decrease. Another way to increase jump length is pressing jump again, after the initial double jump. The Angel will glide forwards, at the cost of his momentum. When he has no speed left, he will be unable to glide. At their maximum speed, they can glide a few tiles forwards. This makes his glide ability on its own much weaker than the Child.

His controls are relatively simple. Normally, he works just like the Runner, with moderate maneuverability and a somewhat fast speed of 10 m/s. However, his midair dash, activated by pressing jump in midair, increases his speed to up to 19.5 m/s. Only 1 dash can be performed in midair before needing to land.

After beating the Box Storage Area, part 11, the Angel's checklist for going home will appear on the map. By clicking on each entry on the list, the player can play through several levels in which the Angel is searching for each of the other characters, and asks them to go home to the Planet. The initial searching levels can only be completed with the Angel, but the ones afterward can be played with any character that is going home. The Pastafarian, the Duplicator, the Child, and the Bunny agree to go home, but everyone else does not. After recruiting everyone he can, the Angel starts to lead them back to the Planet. This will then unlock the tunnel of The Way Back and side tunnels that stretch through it.

The Angel is rather bossy and has a somewhat big ego. This can be shown when he thinks that he would be a much better partner to the Runner than the Skater and Student. He is also shown to be impatient when trying to bring the group back to the Planet. He is prone to anger, seen in the cutscene "Angel vs. Bunny", when he snapped at the Bunny for jumping on him. He does not refrain from speaking his mind, as shown in the cutscene "Friendly Greeting", when he says to the Pastafarian "Perfect example right here: you look stupid when you run like that." His rudeness also makes the Child want to kick him, and the entire cast has some negative view of him. Despite his coarse personality, the Angel also wants to be a hero, which might be a reason he wants to guide the others home, and a line of dialogue during the Going Home Checklist reveals that he also misses his friends back on the Planet. He seems to not be much of a pet person.

Even though he might be bossy and rude, he still has leadership skills, guiding the others home. The Angel has been confirmed to be the second oldest in the tunnels, the first being the Runner. It has also been implied that the Angel may be bisexual, as he would only not be interested in the Runner's brothers for reasons beyond gender (although, the presence of biological gender is not quite known in the case of the Aliens biology).

When the Angel first met the Runner, he was pleased to meet her at most. As soon as she brought up that she was the Cartographer, he was all over her, immediately bringing up his high position in the Factory. He attempts to flirt with her, but doesn't do very well. The Angel is implied to only be interested in the Runner for her fame and intelligence, and if it was instead the less famous (Chemist) or less intelligent (Sailor) brother of the Runner, he would not be interested. After he tries to start working with her alone, the relationship sours almost instantly. As time goes on, the Angel stops trusting that the Runner is trying to lead them home, and demands for her map to learn how to really go home. The Angel finds the Runner annoying and a know it all, and doesn't bring her up on his way home. He also finds her ideas "good enough" at best.

The Angel and the Skater rarely interact, but when they do it is not productive. The Angel refers to him as a show off and an idiot, stating that he is sabotaging himself (ironically, the Angel can't jump high for the sole reason of the Ring he wears). The Angel questions his behavior, and doesn't speak to him much when he finds him in the Angel Missions, changing the subject to going home as soon as possible.

The Angel, while starting out slow, can easily speed up using his ability. His jump isn't the highest, but the speed and jump length make up for it. His maneuverability isn't too great, but as long as you plan your jumps, you'll be fine. As for his special ability, he can gain a boost of speed, and maintain some of his height, which can really help, but you might end up overshooting your jump. Overall, the Angel is a great speed character, and is worth the 12 thousand power cells.

A True Engineer - As the Angel, beat Plan C, part 11 with only one dash. This achievement is not available on some sites, and will not show up.

The Angel appears in 20 of the 65 cutscenes (65 is the total number of cutscenes if including all of the hidden and optional ones). Here is a full list of his appearances throughout the story. 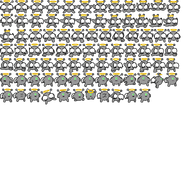 The Angel and The Child meet the Hare

The Angel has an unused sprite. The one between facepalming and kicking seems to be unused. However, it may be used in Stop Solving Problems. It resembles the Runner's sprite when taking a ring off a box, so it was most likely going to be used in a cutscene of him making the boat.