The B-Tunnel is a side tunnel that branches off of Level 40 of the Main Tunnel. It leads to the A-Tunnel and (later on) the N-Tunnel. The tunnel consists of thirteen levels which can be played with any character.

In the Bridge Building minigame, the Runner, Skater, and Student store all of their collected ringed boxes in Level B-13.

There are five (six if a certain secret is counted) cutscenes featured in this tunnel. More information can be found on the Story page.

After beating Level 40, a rather unique cutscene will begin. The Skater has just finished Level 40, and runs into the sleeping Lizard. He starts to apologize to the Lizard, saying he was caught off guard when the gravity changed. Then he realizes that the Lizard is fast asleep, and moves on.

There are 2 achievements exclusive to this tunnel.

Dislodge all the crumbling tiles in Level B-3.

Straight to the End

Beat Level B-13 without changing gravity.

Difficulty of the Levels of the B-Tunnel 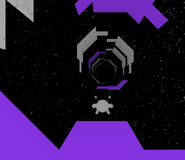 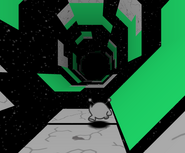 Level B-13
Community content is available under CC-BY-SA unless otherwise noted.
Advertisement