It doesn't care if you call it the "Rabbit" or the "Bunny". All it cares about is bouncing.

12.6 m/s
The Bunny, sometimes called the Rabbit, first appeared in Run 3. Since it's an animal(like the Lizard), it can't speak or understand language, so very little is known about it. The Bunny is described as a "bundle of energy" and "the most hyperactive creature in the solar system" in the game. The Child seems to be fond of it.

The Bunny can be unlocked by getting eight achievements, or bought for 2,000 power cells in the shop.

The Bunny has the highest speed, maneuverability, and jumps in the game. However, it never stops bouncing, making it tough to control. Its top speed is 23.5 m/s.

it slows down if you press a key to jump, but you will jump higher than a bounce. The longer you hold the key, the more they slow down, and the higher they jump.

There are different ways to control it. You can try to maintain it bouncing, and after about 5 bounces, its speed is the greatest, and you can do a big, long jump that can allow you to spend most parts of the level in midair. Even after its first jump, its speed is still extremely fast, and you can do it again, and skipping another large part of the level again. In this way, you can pass the level more easily.

Sometimes, in levels with low head space, you can even reach and flip onto the ceiling even if you do not press jump. Keep an eye on that, and avoid big jumps in low headroom levels.

In difficult levels with a couple long straightaways with gravity switches and difficult jumps, build up speed by shifting gravity to jump over a few jumps that may be difficult with other characters.

There is a glitch where you can press jump slightly after you jump and you gain a little extra jump height and length. This is useful to get that little extra jump length to finish a level. However, you lose much more speed per jump if you do this, so don't try this repeatedly. The timing is not too hard to master.

The Bunny loves bouncing, and is always hyper. It is easily tamed by treats, and doesn't seem too self aware, unlike the Lizard.

The Bunny has had no in game interactions with the Runner.

The Bunny has had no in game interactions with the Skater.

The Bunny has had no in game interactions with the Lizard.

The Bunny has had no in game interactions with the Gentleman.

The Bunny seems to enjoy the Child's presence, and also enjoys the treats it gets from him. If the Child is doing something, the Bunny seems willing to join in.

The Bunny has garnered the trust of the Duplicator, mainly by being just an animal, but also by surprisingly being willing to calm down to cooperate with the Duplicator to get across the gap in The Way Back, part 7. The Bunny may be spending time with the Duplicator while the Child is busy with the Angel, or it may just be bouncing off in the middle of nowhere.

The Bunny has had no in game interactions with the Student

As one of the first instincts the Bunny had was to bounce on the Angel in Angel VS. Bunny, it's safe to say this isn't the first time they have met. The Bunny attacks the Angel because it sees him as a threat and cannot understand his method of discipline, according to player.

Speed: The Bunny is the fastest character in the game, along with the Skier, Skater, and Ice Skater, (if they're all at full speed). It can slow itself down by jumping high and gains speed fast.

Jump Length: Due to its high speed and jump height, the Bunny is able to basically skip half of most levels.

Jump Height: The Bunny can jump as high as the Lizard, being extremely useful in levels where large platforms are spread far apart, and are very high on a wall.

Maneuverability: Since they're always bouncing, they can get hard to control. But when in the air, they have good strafing.

Special Ability: Always bouncing can often get in the way, but it is useful when crossing a large amount of small gaps.

General: Overall the Bunny is amazing once mastered. Player himself wanted the Bunny to be best at many things, and that is definitely the case.

Living Superball - Complete Level A-6 without pressing the jump button.

The Conscientious Lagomorph - As the Bunny, complete Level 25 without pressing the jump button or dislodging tiles.

I Would Bounce 500 More - Starting at any point after the 500m mark, travel an additional 500 meters in a row with the jump button held.

Bunny Hop - As the Bunny, beat Level X without pressing the jump button.

The Bunny appears in 2 of the 65 cutscenes (65 is the total number of cutscenes if including all of the hidden and optional ones). Here is a full list of its appearances throughout the story. 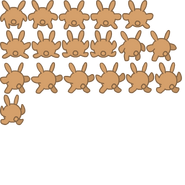 The Bunny has very few sprites, due to its low cutscene appearances, and not walking. Strangely, the one unique sprite they have is only stored in the cut scene they appear in, Boat Ride.

The Bunny used to squish like other characters when landing, however this is no longer the case.