Run Wikia
Register
Don't have an account?
Sign In
Advertisement
in: Bugged features, Character, Articles whose pictures don't show up in fan feed,
and 2 more

Suspicious of others, but he trusts alien technology that's been lying around for ages. Go figure.

Buy him in the Shop, or earn the Typhon's Legacy badge in Tyrant Unleashed (only available on mobile)

Duplicates emerge from his body with randomized jump heights and speed. He can jump off of them by jumping while airborne. He can also switch places with any duplicate. Interacts strangely with tunnel power.

11.5 m/s
The Duplicator is a character in Run 3. He is an avid conspiracy theorist, a "self-replicator", the husband of the Demagogue (Minor Characters), and the father of the Child. He suspects everyone except his son and the animals (Lizard, Bunny) of being involved in a conspiracy against him, although he isn't entirely clear on the details. Also, he is always accusing the Angel of trying to take his son away from him. Meanwhile, the Child seems to think it's all a game.

The Duplicator can be unlocked by buying him in the shop for 6,000 power cells, except on mobile where he costs 25,000 power cells, or you do a specific task in Tyrant Unleashed (Free Download). However, some levels of The Way Back require you to play as him, but he will not be permanently unlocked afterward, like it is with the Angel Missions.

Every few seconds, the Duplicator creates a projection of himself, up to a maximum of six. These "duplicates" mimic his actions, although they have a slightly higher jump height. If he falls out of a tunnel, the Duplicator will switch locations with another surviving duplicate, effectively giving him a second chance or multiple lives.

The duplicates are solid enough to jump on, as long as they're close enough. This allows the Duplicator to jump higher and further, but it requires careful spacing and planning beforehand to keep the duplicates from spreading out. Duplicates can also jump on the Duplicator himself, either accidentally or purposefully, in which case he switches places with the duplicate that jumped on him.

Because of his extra lives in the form of duplicates, the Duplicator's chances of surviving a level may be increased significantly, allowing him to more easily finish levels that have a high risk of failing.

A strategy is to stand in front of a box and wait for the Duplicator to max out on duplicates. More duplicates are always useful.

In Infinite Mode and the Low-Power-Tunnel, if playing as the Duplicator, the brightness from the previous level is usually kept when entering the next, only updating if any in level power triggers exist.

The Duplicator is usually careless, shown when he eats the powder (see below at the bottom of the page) that gave him his powers to make the duplicates.

The Duplicator also accuses people and jumps to conclusions a lot; shown when he accuses the Runner of stealing the Planet, accusing the Angel of trying to steal his son away, and thinking everyone except for the animals and his son are in a conspiracy against him. Because of this, he lacks trust in them.

It is shown that even though he has a careless and accusing nature, he still thinks of other's feelings, as he thinks his wife might be worried about him.

Speed: Average. Most characters have this speed of 10m/s. If he jumps off his duplicates in the right way, he can gain speed.

Jump length: Average. Same as most characters in the game. However, he can jump from duplicates, allowing him to clear large gaps.

Jump height: Again average, but his ability allows him to jump from duplicates, reaching quite a high jump. Oddly, he shares the ability to do a very tiny jump with the Runner.

Maneuverability: Average, as the Student and Pastafarian have the same amount. His duplicates allow him to fall in situations like The Lazy Way, but not fail.

Ability: Creating duplicates is an amazing ability, as it can give you multiple lives and allow you to jump farther and higher. His ability to stabilize light levels can be a blessing or a curse, depending on the levels you start from.

General: Overall, the Duplicator is an amazing character who can survive a long time. Good planning is helpful with the Duplicator, but, similar to his personality, he's quite the "on the fly" character to manage. He functions similarly to the old Runner gameplay.

We Will Survive - Beat Low Power Tunnel, part 16 without losing a single duplicate.

(In the cutscene marked **, the Duplicator is watching from the distance with his son.) The Duplicator appears in 18 of the 66 cutscenes (66 is the total number of cutscenes including all of the hidden, Upcoming and optional ones). Here is a full list of his appearances throughout the story. 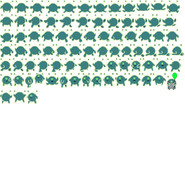 How the Duplicator gained his powers.

3D Practice Model made in Blender by player_03. 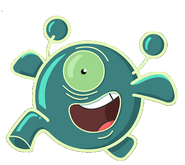