Employs magnets for the rapid procurement of power cells.

Buy him in the Shop, or earn the Heir Dresser badge in Little Alchemist (only available on mobile)

• Hold jump to fly towards nearby Power Cells.

• He can see Power Cells in Explore Mode.

• All Power Cells seen in Explore Mode are worth 1.

10 (m/s)
The Gentleman is an aristocrat, or at least he acts like one: he's the wordiest member of the cast. He focuses on collecting power cells with an electromagnet in his hat. However the electromagnet sends him to the power cell instead of the other way around.

The Gentleman has undergone a few large changes in terms of abilities and controls. We are going to have a look at both the current controls and the outdated ones.

But still, there are still some details that haven't changed, such as that the Gentleman can only be unlocked by buying him in the shop for 2,000 power cells, which is the same as before.

Due to the Gentleman's ability to "surf" multiple power cells, he can be used to achieve many achievements and levels.

As of January 7, 2017, many changes were made to the Gentleman, both to his character and to his gameplay. First and foremost, the Gentleman is now equipped with an electromagnet rather than several smaller magnets sewn into his hat. The Gentleman's electromagnet is toggled by holding and releasing the jump button. This gives the player greater control over the Gentleman. The Gentleman will no longer be pulled unwillingly to power cells and is less likely to be flung out of the tunnel after grabbing a power cell. However, due to the greater weight of the electromagnet, the Gentleman can no longer jump off of collected power cells. The developer had stated before the update that jumping off of power cells didn't really fit his character anyways. Some of the Gentleman's Infinite Mode trivia had to be changed or removed when in the update to outdated tips. Similarly, new trivia has been added to give more relevant tips.

When the Gentleman gets close enough to a floating power cell, the magnets in his hat pull him towards it. This gives him a boost in speed and guarantees that he collects the power cell, making him by far the best character for collecting and farming power cells.

Being pulled in this way may help him cross a gap, but it might also launch him into a gap. To avoid falling, he can jump off of the power cell he just collected. However, after a few seconds holding the power cell, he becomes too attached to consider throwing it away.

In an older version, an alpha version of the Gentleman can be played. While he can't fly towards power cells, he can slow himself down to the point of just stopping, in midair, and outside the tunnel. This makes the Caveman, who also appears in this version, almost useless compared to him.

Each power cell he collects will speed him up a little, and he will gradually slow down if he does not get any power cells. He used to be able to go at 17m/s, but he was nerfed to speed up slower and this speed is very hard to achieve. But to balance this out, his range was increased.

If the Gentleman is falling and flings back to a power cell and is stuck under the tunnel, the reverse happens (supposedly what the magnets were supposed to do as seen in Student Teacher). The power cell flies slowly to you, you claim it, and you fall into the void, showing that the power cells come to you slightly.

The Jetpacker was drawn on stream by player_03. In the drawing, he is looking for an engineer to build him a jetpack. As the Angel walks away, he says that he offered to help but the Jetpacker said no. He may or may not be canon, however, he is likely to be added soon.

His gameplay can be summarized as being planned to do the following. He sits in a chair, with a jetpack on it. When it runs out of fuel, he will fall, and can't jump. Once he refuels, he can go back into the air.

Even though he is accepted, he is not guaranteed to appear in Run 3, at least before the story ends.

The Gentleman is the personification of a snob, a person who believes value of a person is tied to wealth, vocabulary, and formality. As a result, he wears a top hat uses words most others aren't familiar with, which most characters are uncomfortable about. Despite this, he always makes sure to use his words precisely, never being misleading in his words, except possibly for a profit.

He sees himself as someone who deserves respect, as seen in Student Teacher when he refuses to do the Student’s tests, thinking the Student is reducing him to a mere child. As such, he is often seen holding himself to high regard (although how accurate that is is up for debate). He apparently acts much older than he is, being the second youngest adult in the Tunnels, older than only the Pastafarian and the minors.

One of his most notable quirks is his desire for wealth. After coming into the Tunnels, he devised multiple plans to collect power cells. These plans show his eccentricity, as they involve quite interesting feats of manual labor and physical skills. For example, he managed to fit an electromagnet in his hat to collect power cells, and has created two entire tunnels for the general public to test themselves. He also apparently has the skill to create a jet-pack. However, the Gentleman's creations always seem to backfire. His electromagnet, due to something to due with the Tunnel's properties, actually drag him towards power cells instead of the other way around. His tunnels also seem to lack proper design according to the Pastafarian.

He often sides with the Government, probably being it's biggest supporter in the Tunnels, believing in their handling of inflation, likely because inflation doesn't affect him. He is incredibly stubborn, not testing with the Student when asked, and refusing to either go home or to go onward, opting to instead stay in the main area of the Tunnels to finish his projects. This stubbornness makes him hard to talk to. The Gentleman sees himself as better than the other characters, but will still donate an amount of his "earnings" to the others. He was seemingly just as stingy on the Planet, being the second richest of those who entered the Tunnels, the Angel being the wealthiest due to his high paying job.

In general, he is quite the disliked character by the others in the group, but unlike the Angel, he does respect the others, at least to their face.

The Gentleman rarely interacts with her in game, but when he does, he treats her with respect. However he is not afraid to voice his concerns about her, and states that her naming scheme for the Tunnels is dull in his opinion, and asks to change one. He also likely managed to get the Runner's attention about his project, allowing her to mark it on her map.

The Gentleman never interacts with the Skater in game, but in a drawing in a stream, he is shown to question the Skater's dedication to doing the impossible. He sets a box far away enough that no one could ever hope to reach it without outside help, but he is confused as to why the Skater keeps trying. He questions if the Skater knows what "impossible" means.

The Gentleman and the Lizard have had minimal interaction, and their relationship is unclear, however most assume that the Gentleman has in fact adopted the Lizard. Whatever the case may be, the Gentleman does not mind the Lizard, rehearsing his speeches to it. He does however wish for the presence of those who can actually speak.

Can we merge this with the Explanation part of character stats some how? Or at least put it under?

There are some ways to use the Gentleman efficiently. Here there will be some advanced techniques that can be used with the Gentleman.

If you want to make the jump caused by the ability usage shorter, you can release the jump button to reduce the flick after collecting a power cell. An example of a good time to use this is when a power cell is near the top of the tunnel, and there is no ceiling. This will prevent you from flying out the top.

One way to gain height out of almost nowhere is to use what known as "The Height trick." To do it, you need to magnetize toward a power cell, and just before you hit it, release the jump button and press again. You will gain a lot of height out of nowhere, giving you enough time to secure a landing spot or magnetize to the next power cell.

To collect two power cells that are horizontally far from one another, you can press the arrow key which is the same direction as the power cell you are collecting. So if the power cell is on the right, hold right. This will prevent you from having too much horizontal velocity causing you to fly out the side of the tunnel. If there is a wall on the side, you can simply hold the opposite direction of the power cell and this will force you to the correct direction very quickly. You can continue from the wall you jumped on.

Try not to collect power cells that are right next to an empty part of the tunnel, or you might fly into space after collecting it.

Explanation (someone add how to make use of these stats, how it is in some other pages.)

Jump length: When he is going fast, his jump length is comparable to the Skater. However, power cells can theoretically give him infinite jump length. This, combined with his below-average falling speed, also allows him to gain considerable air time.

Jump height: Average. The Duplicator, Pastafarian, and Child have the same jump height as him. But you can use power cells to gain height using the height trick.

Maneuverability: When he is going fast, his maneuverability is not the greatest. However, pressing left or right when approaching a power cell will fling him in the opposite direction.

Ability: This character is meant to farm power cells, so of course it does that. It will magnetize you toward power cells. However, this ability takes much to master.

General: The Gentleman is a character somewhat based on luck, and depends on power cells a lot. If you can take advantage of them, you gain a considerable advantage. Without them, the Gentleman is quite the slippery character, with little control over his jump height and subpar strafing.

Hat Trick - As the Gentleman, beat Level 2 with only the jump button.

Stick the Landing - Use the Gentleman's magnet at least once on Level 10, then beat the level without dislodging any crumbling tiles.

The Gentleman appears in 8 of the 65 cutscenes (65 is the total number of cutscenes if including all of the hidden and optional ones). Here is a full list of his appearances throughout the story in chronological order. 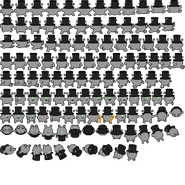