This Tunnel is called "Probably The Way Onwards" when the first level isn’t finished, making people think it might lead to the Wormhole.

Difficulty of the Levels of the H-Tunnel 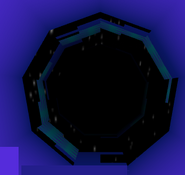