The I-tunnel is a tunnel linked with the N-tunnel. It is 7 levels long. Branching out are the C-Tunnel (I-1) and H-Tunnel (I-7). Like the N-Tunnel, it uses conveyor tiles, but there are also sideways conveyor tiles, different to the N-Tunnel. I-5 is Hell and is in the poll. It's advised that you don't use the Skater to be beating this tunnel as you'll be needing to do a lot of turning and high jumping.

After beating I-7, a cutscene begins with the Skater asking the Runner why she doesn't want to go home when she's very famous. The Runner responds that she got tired of fame. He compares how no one could even remember him to how everyone talked about the Runner. The Runner says she didn't appreciate her fame. She says that she doesn't know everything, yet people began to think that she did. She gives an example of a time when the Sailor got struck by lightning saying that it was mostly her fault. The Skater changes the subject and asks the Runner how to get famous, but she refuses, saying that she doesn't want to give him an incomplete map.

Difficulty of the Levels of the I-Tunnel 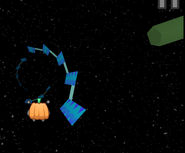 Level I-7
Community content is available under CC-BY-SA unless otherwise noted.
Advertisement