The Ninja is a scrapped costume for the Child that was found in the game files. The costume had the ability to charge jump at one point. Player said that if he ever gets around to working on this costume again, it likely won't have the balloon, as he wants it to be more agile, and the balloon is apparently quite hard to lug around. He may instead hold a cattle prod like sword, as the Child has always had interest in imbuing weapons with elements. It is likely that this costume was considered for the Child due to his tendency to sneak around and hide in several of the cutscenes; as well as his idolization of ninjas. It is confirmed that the Ninja would've been in a cutscene with the Pirate, but the story went elsewhere and slowly faded out of interest. In the lore, ninjas are theorized by the Duplicator to be working in junction with pirates as part of the Government's conspiracy. 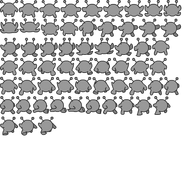