The Pastafarian is a priest of the Church of the Flying Spaghetti Monster. According to her, her main duty is to help others, which she does by suggesting ways they could improve themselves. She's been seen making suggestions to the Student and the Angel, apparently both without success. However, her persistence is remarkable and seems to be endless. She also speaks in a very formal way.

The Pastafarian has undergone some changes in her gameplay, which are mentioned below.

Despite the fact that the Pastafarian has been changed, some things have remained unchanged, such as the fact she can only be unlocked by buying her in the shop for 6,000 power cells on the web or 25,000 in Run Mobile.

A "bridge" of bright squares appears when the Pastafarian is used, allowing her to run on what would otherwise be empty space. Running on the bridge speeds her up, but if she strays too far from the solid ground, the bridge disappears. If she stays close enough to solid tiles, the bridge (and the speed boost) will last indefinitely. Her normal speed is 9m/s, but on the bridge, she can go at 12m/s.

Another use for the bridge is as a "backup plan," in case she misses a jump. However, landing on the bridge makes it disappear sooner than if she stepped onto it.

A glitch has been found so that when you run up a box, the game forgets that you are on the bridge, so you can jump on the bridge without penalty. This was first discovered by DerpFace2227. It was patched before the Pastafarian revamp and now makes no difference in gameplay whatsoever.

As said before, the Pastafarian has undergone some large changes. The light bridge now uses a more complicated power system to determine its range and brightness. By default, at the start of each level, the bridge's power is very low, and covers just 1 tile away from solid tiles (except for levels with very small tiles, which may have a range of 2 tiles). As the power of the bridge increases, both the range and brightness of the light bridge increases as well, eventually reaching a point wherein there is no range limit applied to the light bridge.

A number of factors will affect the power of the light bridge:

Mechanics present in both versions

The Pastafarian seems to have good morals and tries to make others polite. She tries to make people live the most out of their lives. She also is friendly and nice. She seems to crave adventure, as she brought a pirate costume and is possibly looking for the Wormhole, as implied by the cutscene Thanks for Playtesting. However, she could just be looking for the Flying Spaghetti Monster. She is loyal to her lord and respects people's opinions. She also likes to do knife throwing, as shown in Change the Subject. She seems to be a stereotype of religious people, as player_03 once said he stopped arguing on the subject of religion because it went on forever, and this trait seems to be present in the Pastafarian.

The Pastafarian has one unlockable costume, a pirate costume.

When the pirate costume is equipped, the Pastafarian switches out her pasta strainer for a tricorne hat and carries a cutlass instead of her usual wooden spoon. She is officially known as the Pirate when wearing her pirate costume. The Pirate has higher maneuverability compared to the normal Pastafarian, due to her headwear weighing way less than an entire metal colander. However, since the cutlass has less metal than the colander, the light bridge produced is weaker.

Saved by His Noodly Light - Spend five consecutive seconds running on the endless abyss of space, supported only by the Flying Spaghetti Monster's holy light. To prove your trust in Him, do this eight times in a single Infinite mode run. In older versions, you needed to jump onto the bridge from a non bridge tile 30 times.

Well Grounded - Finish part 2 of the Way Back without leaving the ground. His noodliness commands it!

Topaz Bridge - After the first three tiles of part 2 of the Crystal Gallery (Level D-2), don't press any buttons.

Leap of Faith - As the Pastafarian, beat Plan A, part 3 with only one jump.

The Pastafarian appears in 11 of the 65 cutscenes (65 is the total number of cutscenes if including all of the hidden and optional ones). Here is a full list of her appearances throughout the story. 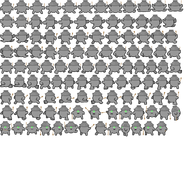 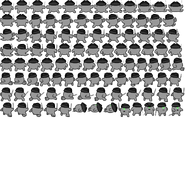 Notice that The Pirate has some unused sprites. Player has commented on these specifically, saying he has no idea why he added them, and if they will be used. A couple seem to resemble some of the Pastafarian's, but others are unique. Player_03 confirmed that this was originally for a pirate vs. ninja sword fight between the Pastafarian and the Child, but the story went in a different direction.