Plan C is a side tunnel that branches off of The Way Back. It is believed to lead back to the Planet, and will have twenty-two levels when finished. It currently has only sixteen levels, as it is still being worked on by the developer.

There are two cutscenes in this tunnel. More information can be found on the Story page.

After beating Plan C, part 8, the Child asks the Pastafarian which superpower she would like to have. She doesn't have an answer, and so the Child asks the Angel. The Angel says hammerspace, which he explains is a power to create a pocket dimension, and calls it cool. The Child says he wants to control the wind, so he could go anywhere. The Angel then asks the Child, “Why would you pick such a bad power?”. Then the Pastafarian takes the Angel away. She says that this is supposed to a fun fiction game. The Angel says that the Child has potential to become an engineer. She then asks if she if can make a practical suggestion. The next few lines can be summed up as: Become nicer. Then the Pastafarian leaves, saying that she has no desire to go to the planet and only came to help the Angel become nicer. As the Pastafarian leaves, the Angel thinks to himself, “Then... You never needed my help?”

After beating Plan C, part 12, a cutscene involving the Child and the Angel appears. The Child catches up to the Angel, and saying "Are you gonna make us wait two months"? in which the Angel replied "Of course not!" The Child will then say "how soon?" and then he said two months. The Child says "But you said"... before getting interrupted with "I'm not making you wait. The Planet and Tunnels' different orbital speeds are what's making you wait." The Child then says "What?" with the Angel then saying “Listen, this isn't complicated. The Planet is about a hundred million kilometers away. It'll catch up in about two months. Don't go blaming me for that." and then the Child replies "But why do we have to wait"? The Angel facepalms.

After beating Plan C, part 14, a cutscene starring the Child appears. He appears to spin while saying he's too bored. He then lies down (and slightly moves) for a few seconds and then he has an idea of building a spaceship. Then he comes back to Plan C, part 9 where he tells the Angel that he is going to build a spaceship in two months, but the Angel admonishes the Child, saying he won’t. The Angel then says "But hey, it’s worth a try. It'll be a good learning experience." The Child replies with "But I don't want a learning experience. I just want to get home!" The Angel ends the cutscene with the line "Too late. We're doing this." 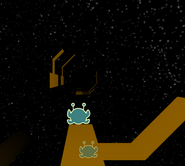