Seldom
Rings are strange objects that appear in Run 3. They are usually found attached to random boxes scattered throughout the Tunnels. However, they can also be detached and used for other purposes.

The ringed boxes are first discovered by the Student in the cutscene "Something Weird," which takes place in the Box Storage Area, part 6. Ringed boxes always have two rings attached, on opposite sides. The rings allow the box to be pushed forward and backward. The Student once mentions that ringed boxes can be pushed up and down too, but it takes a lot more force.

Rings can also be detached from boxes and used to move other things around. This is first shown by the Gentleman in the cutscene "Revision," when he uses a detached ring to move tiles around to make his Memory Evaluation levels. Detached rings can also be seen in the cutscene "Leave It Here". They are both seen to be able to carry the rings around easily, implying that the rings are not very heavy. It is also shown that rings can be easily detached from objects, as shown in both cutscenes. In the Infinite Mode Trivia for the Angel, it is said he could cut a tunnel if he wanted, presumably with the use of his ring. 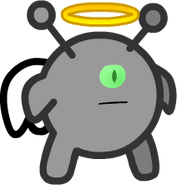