The Runner is the main protagonist of the Run trilogy, appearing in all three games. In Run 3, her goal is to thoroughly explore the tunnels, marking each one on her map. She is unlocked upon starting any of the three games for the first time and is recommended for beginners.

The Runner is the default character. She is somewhat maneuverable and has a decent jump. She has 7 bonus costumes: the Student, the Lizard, the Gentleman, the Angel, the Caveman, the Zombie, and the Skater. None of these, excluding the Skater, have any special abilities and are only cosmetic.

The Runner has good for the cost of speed and jump distance. As said in the description: "Easier to control, can't jump as far." She plays almost exactly the same as in Run.

As per tradition for the series, she retains her basic controls from the previous two games, albeit slightly improved for faster turns. Her only weakness are long distance gaps or anything to potentially slow her down, as it will take a while to build up her top speed.

She can beat almost any level when used correctly.

The Runner is the simplest character in the game. She has one green eye with a darker green pupil. She doesn't wear any notable accessories like hats and other cosmetics.

The Jack-O-Lantern has a carved pumpkin around her body.

The Skier has red skis and a pair of silver ski sticks. Her hat is red with a white bobble on top. Her antennae don't appear.

The Runner is very kind to the others and has great leadership skills. She is open-minded and can work together with others such as the Skater and Student to explore. She loves to map out and explore new places and wants to see everything the world has to offer when she can. The Runner doesn't like it when other people doodle on her map, but doesn't want to offend them by erasing their doodles.

She may seem indifferent to other people's lives, but gives examples of relevant life problems and solutions. She apparently appreciates clever pranks. As revealed in "Fame", she's known as the Cartographer on the Planet and is quite famous. She isn't all about the attention however, and prefers peace and quiet. She still feels like she has not accomplished much in life, and that people take her too seriously. She is also quick to monologue, especially about map making. During Bridge Building, it is revealed that she will help with science, but often doesn't fixate on it, and also will push herself to finish tasks, gathering plenty of boxes within the same amount of time it takes for the Angel to gather everyone who is going home. She is also quite the problem solver, noting to fill in gaps in areas that are hard coming backwards.

She is apparently quite an important figure on the Planet, overlooking construction of various cities, likely setting aside land for them

The Runner often humours the Skater, accepting his apologies, and exploring with him. She's quick to explain things the Skater doesn't understand, teaching him about fame, and identifying the Wormhole for him. They are close enough to be willing to go together all alone into the H-Tunnel, splitting from the Student.

The Runner doesn't often interact with the Gentleman, often finding his antics strange. She is willing to let him rename the D-Tunnel, however, she does not like the name, deciding to never let the Gentleman name another Tunnel. She respects him enough to let him keep the name though.

The Runner is very tolerable of the Duplicator's suspicion, and is quick to ignore his ramblings, or correct and reassure him about his worries, telling him that the Planet will come back, and that she is not doing the same thing in Insanity.

The Runner is tolerable of the Pastafarian's beliefs, as she is with the Duplicator. She suspects that she is pranking her with her persistence with the teapot. She finds it futile to argue with her, and instead humors her beliefs.

The Runner is quick to help the Student with her experiments, and also looks to the Student to solve problems. While the Student desires to solve the ringed boxes, the Runner only cares to use them as a bridge at first. According to player, if anyone helped the Student build her device, it was the Runner. She is also willing to listen to the Student's massive rants and lectures.

The Runner and Angel have had a bit of a rivalry together. The Angel wants to lead the others home and be a hero, while the Runner wants to keep exploring the tunnels. The Runner also refused to give her map to the Angel and follow him. Most of all, she dislikes the fact that the Angel has a big ego. The Runner is willing to work with the Angel, but only if she can keep working with the others. The Runner is quick to tease the Angel about his instant flirting with the Runner, but she still admits to herself that the Angel has accomplished more with his life than she has. Regardless, the Runner wonders if she is a bad person when she hopes the Angel will fail at finding the Planet.

The Runner has a close relationship with her family. She feels guilty for letting her brother, the Sailor, sail into a thunderstorm. She is quick to look to help from the Chemist, her other brother, but wishes he didn't worry about her so much, like her dad. The Sailor however says her father does worry about her, but is able to hide it well. She often hangs out with the Sailor. She made an elaborate satellite system to let her family know she is safe in the Tunnels.

The Runner has two unlockable costumes; a winter costume and a Halloween costume.

"She found a box full of ski gear and grabbed the items that fit. Hopefully the original owner won't mind." -In game description (old)

"Listen, ANYONE would have trouble staying in control on frictionless skis." -In game description (new)

Like the Runner, her true weakness is anything that can slow her down. Without any acceleration, she won't be able to make any long jumps.

"Well, I guess that's one idea for a costume. Isn't it heavy, though?" -In game description

The Runner's Halloween costume is unlocked by beating the Low-Power Tunnel. Alternatively, it can be bought in the shop for 750 power cells. When the Halloween costume is equipped, the Runner wears a large carved pumpkin that covers most of her body. She is officially known as the Jack-O-Lantern when wearing her Halloween costume. She will jump very high when she has the Halloween costume. However, the jump height is still slightly lower than the Lizard's. Though, this is already more than enough for most situations. Like the Lizard you'll need to beware of smaller tunnels, as jumping too high can send you out the tunnel. Her strafing is her biggest weakness wearing this.

The Runner is a very simple character that is easy to use. She accelerates faster on the ground, meaning staying on the ground is generally recommended for speed. Her jumping abilities are extremely helpful. Her strafing is great as well, making travelling the tunnels a breeze.

Overall, the Runner is a very easy character to use, and is helpful in almost all situations.

The Skier on the other hand, is focused much more on speed. Similarly to the Runner, she speeds up on the ground, however, she can reach speeds as high as the Skater! The rest of her stats are the same, except for the fact she maneuvers better on ice. She is the one of the best characters for Infinite Mode, due to her extreme ease of speeding up and slowing down.

The Jack-O-Lantern, is slow and jumps high; basically a modified Lizard. This costume is extremely useful as it combines the high jumping of the Lizard, and the accessibility of the Runner. It is also useful in levels such as I-5.

Here is a list of all achievements in Run 3 for the Runner.

Coming Full Circle - As the Runner, travel all the way around Level 35.

Dodge the Squares - As the Runner, complete Level 4 without jumping or dislodging tiles.

Frictionless - As the Skier, reach the conveyors in Level N-7. Make sure to keep your skis fully inside the tunnel.

A Glimpse of New Places - Locate the Wormhole

The Runner appears in 17 of the 65 cutscenes (65 is the total number of cutscenes if including all of the hidden and optional ones). Here is a full list of her appearances throughout the story, in chronological order. 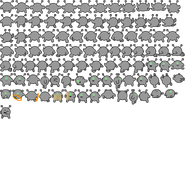 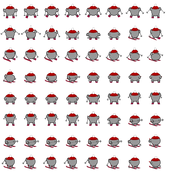 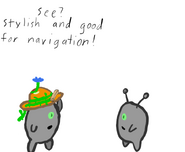 The Runner trying on a new hat

The runner in Infinite Mode

The sprite next to her current selected one is similar to her old one, but is unused. Her sitting is also unused.