Run Wikia
Register
Don't have an account?
Sign In
Advertisement
in: Character, Articles whose pictures don't show up in fan feed, Run 1 characters,
and 3 more

The Skater is a major character in the Run series, appearing in all 3 either as an unlockable or as a starting character. He likes to challenge himself and will happily attempt to pass a level the hard way just to improve his skills. He claims to have finished 49 "laps" presumably meaning he's finished each level at least 49 times.

Unlocked after beating Level 50, the Skater is largely the same as he is in future installments. He can jump slightly farther than any other costume and can skate along tiny gaps when needed, making him very useful for Infinite Mode.

In Run 2, the Skater plays a little differently than Run 3. He doesn't get frustrated and has less of a difference from the Runner, however this is mostly because the Runner is completely different in Run 3. He moves fast and jumps farther with limited sideways movement. Similar to the Runner, he can use the wall jump trick.

The Skater can be unlocked by beating Level 10 or by buying him in the shop for 300 power cells. He is one of the fastest characters in the game at 19 m/s, second only to the Bunny at full speed. He has a lower-than-average jump height, but his high speed means he can still jump extremely far. The Skater suffers from low maneuverability and struggles on levels where he has to move sideways often.

After failing a single level several times in a row, the Skater becomes frustrated and pushes himself harder until he quits or beats the level. When pushing himself like this, his top speed matches the Bunny's.

The Skater is always challenging himself and trying to find new ways to improve. He can be ignorant and oblivious at times - like in The Next Big Thing when he ignored the Angel's request to go home. Despite this, he's generally happy, joyful, and kind - and is easy to make friends with. He's also willing to go out of his way to help others - as seen in Coming Through and Don't Question It. However, he can also be a pushover - making him hard to deal with. He can get aggressive if you fail a level too many times - and will go as fast as the Bunny. This is also seen in Don't Knock It when he yells at the Angel. He has a somewhat low intelligence but is a good problem solver - whether he decides to be strategic or use brute force.

He is approximately 16 years old and likes to live life freely - as seen when he says he's going to stop attending school in Truancy. He also has an interest in trying new things - like when he tried ice skating. The Skater circumnavigated the entire Planet and met everyone there but nobody remembers his name - which leads him to feel jealous of the Runner who got fame because of her mapmaking and construction skills.

The Skater has one unlockable costume, a winter costume.

The Skater's winter costume is unlocked by beating the Winter Games, which is found after beating Level 15. Alternatively, it can be bought in the shop for 500 power cells. When the winter costume is equipped, the Skater wears a red bobble hat with a red pompom, and ice skates rather than roller skates. He is officially known as the Ice Skater when wearing his winter costume. The Ice Skater has the shortest description out of all characters.

You may want to consider using him for any ice levels as his mobility is, coincidentally, best on ice. Using him on normal tiles will render the same effect ice has on other characters.

The Skater has the appearance of the Runner, with roller blades with 3 wheels in a line.

The Ice Skater has a red bobble hat and ice-skates which have 2 blades on each skate.

Planning Makes Perfect - Finish part 4 of the River without jumping and without using any tunnel-powered abilities. (For instance, the Skater's skates are allowed, yet the Duplicator's duplicates are not.)

Ramping Up - Beat part 16 of the Winter Games without jumping. (Hint: ice skates may help!)

A Glimpse of New Places - Locate the Wormhole

The Skater appears in 12 (13 Included If Counting The Upcoming Ones) of the 66 cutscenes (66 is the total number of cutscenes if including all of the hidden, Upcoming and optional ones). Here is a full list of his appearances throughout the story in chronological order.

Old artwork from an earlier version of Batteries 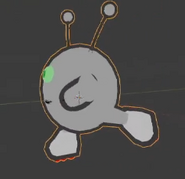 The Skater's model as seen on stream.

The thinking Skater is unused, along with the waving, select pose after the "T-Pose", the angry one, and an earlier version of his sprite in "Batteries".