The T-Tunnel is a tunnel found at the L-Tunnel. It is seven levels long and moderately challenging. The T-Tunnel is normally unavailable on the HTML5 version of Run 3 on Cool Math Games and player03.com. You can still access it on player03.com and Cool Math Games by clicking on the achievement A Glimpse of New Places. The Lizard should benefit you in the early stages, but get ready to use the Bunny or Student later on.

There are two cutscenes in this tunnel. More information in their specific pages.

After beating Level T-7, a cutscene featuring the Runner and the Skater will begin. The Skater and the Runner are on the edge of the level, looking at the Wormhole. He complains to the Runner that they were nearly there. At first, he doesn't even know what are Wormholes, only that they're trying to reach it. The Runner explains that the Student had identified it as a wormhole earlier, and that it connects to another point in the Universe. She tells him to check for any tunnels they missed.

After you finish pushing the box out of Level T-4 with the Runner in Bridge Building, you will initiate this cutscene. The Runner is trying to push a box on Level T-4, and gives up. So instead she takes the ring off the box, and puts it on another one to push back into Level T-3.

Beating this tunnel, Box Storage Area, part 6 and the B-Tunnel will unlock the Bridge Building minigame.

Difficulty of the Levels of the T-Tunnel 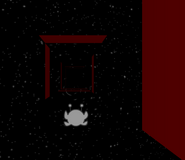