The River (F-Tunnel) is a tunnel in Explore Mode in Run 3 . It is unlocked after completing the M-Tunnel.

There are two cutscenes in this tunnel. More information can be found on the Story page.

After beating F-5, the cutscene 'Socratic Method" will begin, in which the Runner agrees to let the Child change the name of the F-tunnel, but nothing else. She goes on to explain why, showing him that if, for example, she moved the position of level A-1 to the end of the Box Storage Area, the map would be wrong because there's nothing there. The Child understands, so the Runner allows him to change the name from "F-Tunnel" to "The River". After this cutscene, the F-Tunnel is changed to "The River" on the map.

There are 3 achievements in this tunnel. 2 if you don't count scrapped ones.

Beat The River, part 1 with the Pirate costume and without jumping.

Finish part 4 of the River without jumping and without using any tunnel powered abilities. (For example, the Skater's skates are allowed, but the Duplicator's duplicates are not.)

Don't touch the boxes in part 5 of the River.

Difficulty of the Levels of The River (F-Tunnel) 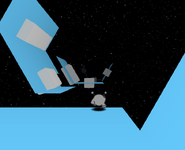 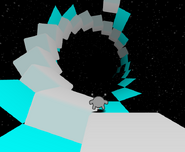