In the first set of experiments I conducted, each character was played in Infinite Mode 6 times. Any measurements that fell below 600m were discarded and redone. The following graph displays the results, rounded to the nearest meter:

This graph seems to follow the "stereotypes" that one would think of in Run 3. The Runner is an average character in these trials. The Pastafarian has always been my personal favorite, so it makes sense to see it at #1. The Gentleman's numbers support the idea that he is best suited for money rather than distance.

The second set of experiments occurred on August 5, with the same guidelines following: each character was played in Infinite Mode 6 times, with any measurements that fell below 600m discarded and redone.

It would help to see the differences between the two graphs... so here they are:

Finally, an overall ranking of the characters' performances, table-style: 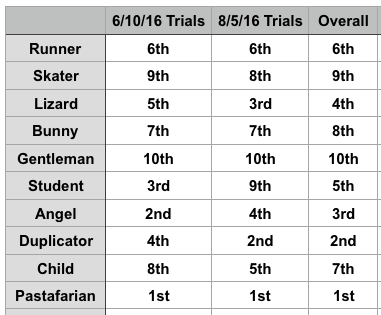 Some notes and thoughts on all of this:

Again, none of this is perfect, and some people may just find all of these numbers to be meaningless. Interpret the data as you will. Also, as I mentioned at the top, there will be additional analyses coming soon, so be sure to keep an eye out for those.If you have any questions, comments, suggestions, etc., feel free to let me know either in the comments or on my homepage at Kongregate.

Retrieved from "https://run.fandom.com/wiki/User_blog:Mathwiz100/Mathwiz_Presents:_Run_3_Analysis_A?oldid=223"
Community content is available under CC-BY-SA unless otherwise noted.