Before we go to the graph, it should be pointed out that there are two types of Infinite Mode runs: runs for distance (addressed in Analysis A), and runs for power cells (addressed in Analysis C). This matters in terms of speed. When a player runs for the sake of distance, they can go as fast as they wish. When a player runs for power cells, however, they generally go slower to be able to grab the power cells. This matters in terms of speed.

Analyses A and C were run under the same guidelines: each Character made 6 (solo) Infinite Mode runs, with any measurements falling below 600m discarded. One of the measurements that was tracked during both analyses was the average speed per run (measured in meters per second). This graph displays the results from Analysis A:

Now, as I said, players generally go slower when they run for power cells, so the numbers in Graph C should be lower:

Here's a table to see the overall results:

Well, these results should make sense, considering how each Character's abilities influence their speed. It was quite impressive to see the Duplicator, Child, and Pastafarian have speeds so close to each other. Technically, the Pastafarian should have had the higher speeds from her light bridge, but I tend to use that light bridge as more of a safety net than a weapon. The only other note I have so far is that I was a little surprised to find out that the Student is now slower than the Lizard.

Now, take a look at the difference between the speeds in Analysis A and Analysis C:

Two thoughts about these differences:

There is one more table to display, which addresses what may be the most important part of this analysis. Prior to finding out the numbers on the speeds, I predicted that there would be an inverse correlation between speed and distance. Having said that, this table pulls up the rankings for both and displays them, side-by-side: 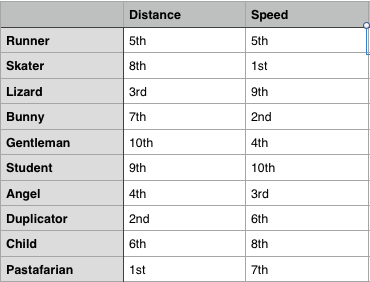 This makes sense for the most part, with two notable exceptions:

Ending this analysis on a philosophical note... why does speed even matter? There are many ways that this question can be answered, but here is one of them. Now, not to seem pessimistic, but a general term that can be used to describe people today is "impatient". From food deliveries, to the loading of a webpage, to a social media response, people do not want to wait on the aspects of their lives. To them, speed equals power, effiency, and happiness. To them, "faster is better". To a certain extent, I understand this. Back in the days when I was completing the Explore Mode levels for the first time and earning power cells in Infinite Mode in order to unlock everything, I generally used the Bunny and Skater more often than anyone else. It is fun to be fast, but as Characters such as the Lizard have proven, it is not always best.

Amazing how one aspect of the game can create such a lengthy analysis. (Imagine what the power cell analysis will look like...)

By the way, keep in mind that none of this data is perfect, and some people may just find all of these numbers to be meaningless. Interpret the data as you will. If you have not checked out Analysis A (which covers distance), click here. Analysis C (did we mention that it covers power cells?) will be posted on Friday, August 19. There will also be an Analysis D and Analysis E in the future, but this will not be for quite some time (more on that later). If you have any questions, comments, suggestions, etc., feel free to let me know either in the comments or on my homepage at Kongregate.

Retrieved from "https://run.fandom.com/wiki/User_blog:Mathwiz100/Mathwiz_Presents:_Run_3_Analysis_B?oldid=240"
Community content is available under CC-BY-SA unless otherwise noted.