Due to various complications, Plan A, B, and C had all failed. But the Angel was sure this time the plan would work. The orange, tiny launch site grew quiet as the Wind Sailor, the Child's ship started up. The Angel had merge it with the Boat using some ring shenanigans, and after the last failure they finally figured out the problem with the angle they were approaching from.

Finally, after 20 minutes of waiting, the Duplicator and Bunny showed up. The Duplicator had bonded with the Bunny while the other two were at work. 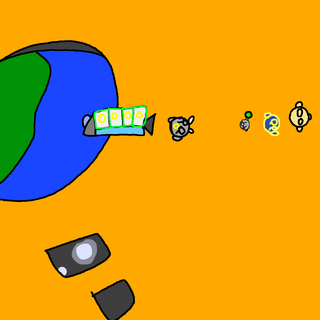 The Child was extremely hyper

Duplicator: "Hold on, I need to calm down the Bunny first..."

Getting into the ship was easy, even if the Bunny made it shake from its endless hopping.

They set off... They successfully exited the Respawn Barrier, and as such the Rings became useless. The Ship went careening down towards the Planet, falling apart, but with its passengers (hopefully) safe within the boxes.

The Gentleman and the Lizard wandered throughout the Tunnels. He had been working on his own method of leaving the Barrier, but hadn't yet had any ideas set in stone. He had gotten pretty skilled at engineering with the rings, even managing to make a jetpack. Not that it mattered now. The Gentleman watched from the Winter Games as the Planet left the Tunnels behind once again. Realizing his misfortune, he decided he didn't have time to wait for the Planet, and made way for the B tunnel. 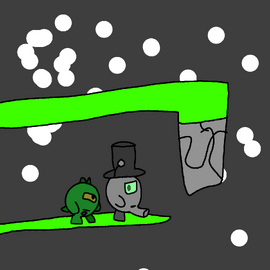 The Beeping turned out to be a generic message, but it showed that the Planet hadn't given up on helping those still in the Tunnels. The Student waved to the Runner and Skater, who had just finished exploring the H, K, J, and P tunnels. The Student was however, surprised to see the Pastafarian jump out of nowhere, causing her to trip on a conveyor. 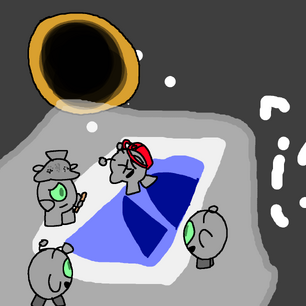 Student: "Well, I found out the Government has been trying to contact us, I just hope the Angel gets back home to tell everyone we're OK!"

Pastafarian: "Well we aren't going to accomplish anything standing around, lets head into that Tunnel so we can get to that Wormhole!"

The Skater yells from the Tunnel.

Student: "So, what do you think you will call this one Runner?"

She doodles a signal symbol near the C tunnel, before realizing that the Pastafarian inserted the Flying Spaghetti Monster onto the Map...

The Angel and Co landed in the Ocean, and spent two months getting to the City, but they made it.

A crowd was awaiting them, including the Demagogue and Caveman.

The Demagogue knew they would be back soon from a combination of the Tunnels appearing in the sky again, and knowledge from the Runner's father, the Survivalist.

The Survivalist received the signals from the Runner, an told the Demagogue what had happened to the Negotiator so she wouldn't be worried upon his return.

The Runner and the others encountered another gap, but with the help of the Pastafarian they were able to cross it without needing to gather boxes. It got harder to stand the closer they got to the Wormhole, and when they finally reached it, they stood in front of it for minutes. They saw a tunnel on the other side, deducing it would be safe to enter.

But not before the Runner put a checkmark on her map...