Run Wikia
Register
Don't have an account?
Sign In
Advertisement
in: Character, Articles whose pictures don't show up in fan feed, Run 1 characters

The Zombie is a costume for the Runner in Run. Their canonical status is unknown.

The Zombie has the same general body shape as the Runner; however, the exposed brain emerging on the top, removing the antennas, and the left leg being a raw bone change the silhouette slightly. The Zombie also has a small scar on the right side, and grayish-green skin, further differentiating them from the normal Runner.

On the Run Mobile game art, the Zombie has a scar underneath their right arm.

This anatomy is confirmed by player_03 to not be entirely accurate, and the Zombie will need a redesign before being added back into Run 1 as a costume.

The Zombie is unlocked once you've completed Level 19 and moved forward to Level 20 in Run. There is no change in performance or gameplay when playing as the Zombie; the only difference lies in the design.

As with all the costumes in Run, it is only available to those who are playing on Kongregate with an account.

Along with the Caveman, the Zombie appears in an alpha version of Run 3. They have had two abilities over time, however this section focuses on the one that has been more thoroughly tested. Their original ability was a checkpoint system, every 33 meters (sixy six in todays standards), the Zombie would place down a tombstone. If the Zombie falls afterwards, they go back to the tombstone instead of the start of the level (or failing outright in Infinite Mode). The ability needs more testing in Explore Mode. The tombstone can not normally spawn in mid air or on crumbling tiles, but seems to be able to if you have already fallen once in a run. Sometimes it doesn't appear at all, but this is likely a bug. It also does not spawn in level transitions, or outside the tunnel. To make up for their exceptional ability, their stats are all but high.

Speed: The Zombie is the slowest character in the history of the series, possibly slower than the Lizard when it is tired. This can make larger gaps hard to manage, but will give you time to react.

Jump Length: Their jump length is subpar, but is usually enough to cross most gaps, as long as you stay on the correct path that is.

Jump Height: The Zombie may have a bad leg, but without high jump height making any large jumps would be impossible. Therefore, the Zombie has decently high jumps.

Maneuverability: It seems to be only slightly lower than the Lizard's strafing, and as such can allow you to correct your path if you see a hard jump coming up.

Special Ability: Checkpoints is an extremely unique ability, and while its utility in Explore Mode is up for debate, the potential in Infinite Mode is unquestioned. The details aren't quite known, but it does seem to become less useful in various ways after you fall, as stated above.

Overall, the Zombie may have the most conservative playstyle in the series, other than maybe the Tophat, the oldest version of the Gentleman. Though, depending on how much you rely on the tombs, you can afford to be reckless. Don't be afraid to take your time as the Zombie, you aren't going anywhere too fast anyways. 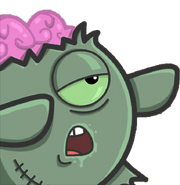